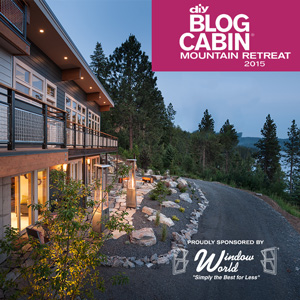 NORTH WILKESBORO, N.C., August 4, 2015 — Window World, America’s largest replacement window and exterior remodeling company, is a proud sponsor of DIY Network’s Blog Cabin Giveaway for the third year in a row. People are encouraged to enter on Window World’s website to be in the running to win a completely furnished cabin in Coeur d’Alene, Idaho, along with a $50,000 cash prize provided by Quicken Loans.

This year, Window World doors and windows were utilized in the construction of the modern mountain home. The products that were used included: 47 Desert Clay Colored Windows, 8 Desert Clay Colored Patio Doors, one entry door and one garage door. The cabin was built using contemporary design elements and features a modern look that makes it cozy, yet impressive.

The DIY Network created the Blog Cabin Giveaway series based on three ideas: You Design It, We Build it, You Could Win It. Viewers are given the opportunity to express their creativity by voting for designs and get to watch as their vision comes to life through the captivating show.

The grand prize package has a total value of $900,000. Viewers can enter twice a day through the submission form found here. Submissions began at the end of July and are running through Sept. 11, 2015.

Window World®, headquartered in North Wilkesboro, N.C., is America’s largest replacement window and home remodeling company with more than 200 locally owned and operated offices nationwide. Founded in 1995, the company sells and installs windows, siding, doors and other exterior products. To date, Window World has sold over 10 million windows. Window World is an ENERGY STAR® partner and its window products have earned the Good Housekeeping Seal for eight consecutive years. Additionally, through its charitable foundation Window World Cares®, the Window World family provides funding for St. Jude Children’s Research Hospital®, where it was named New Corporate Partner of the Year in 2010. Since its inception in 2008, the foundation has raised over $4.5 million for St. Jude. Window World, Inc. also supports the Veterans Airlift Command, a non-profit organization that facilitates free air transportation to wounded veterans and their families.