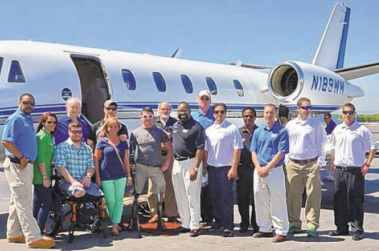 WASHINGTON, D.C. — Local Window World store owners sponsored a mission for the Veterans Airlift Command (VAC) on May 2. Three wounded veterans traveled from Winchester to Destin, Florida for the EOD Memorial Weekend. The soldiers attended fundraisers as they honored fallen EOD (explosive ordinance detonation) comrades. The event was created by the EOD Warrior Foundation to pay homage to service men and women from all branches of the military who have died as a result of an EOD mission, and to provide support for wounded EOD personnel. Funding for the aircraft and pilot were provided by Window World stores in Winchester; Central Valley (Virginia); Las Vegas (Nevada); Fresno (California); and Bakersfield (California).

One of the soldiers on the transport mission was Taylor Morris, a Navy EOD 2 tech and quadruple amputee who was injured in 2012 in Afghanistan. “I’m grateful that we got to attend EOD Memorial Weekend,” said Morris. “We celebrated the lives of our fallen brothers and raised money for a worthy cause.” Other veterans on the Window World corporate plane included Army EOD Tech Sergeant Rob Easley, who lost both legs in December 2012, and Marine EOD Tech Staff Sergeant Tim Brown, who is a triple amputee and was injured in February 2011.

The VAC is a non-profit organization that facilitates free air transportation to wounded veterans and their families through a network of volunteer aircraft owners and pilots. To date, Window World has supported 40 missions for the VAC, and this is the second mission sponsored specifically by Greg Deathridge and Melinda Hawks, owners of five Window World franchises including a location in Winchester

“We are so honored to support a mission uniting soldiers to pay respect to their comrades,” said Deathridge. He brought his entire staff from the D.C. store to meet the veterans and show appreciation for their service. “Our entire organization is proud to have been part of this second mission and have the opportunity to meet these incredible people.”

About Veterans Airlift Command
The Veterans Airlift Command (VAC) facilitates free private air transportation to wounded warriors, veterans and their families for medical and other compassionate purposes. All flights are made available through a national network of volunteer aircraft owners and pilots. To learn more about the VAC, visit www.veteransairlift.org.